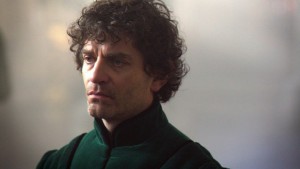 King Edward IV put quite a target on his back when he defied the orders of Lord Warwick and proclaimed Elizabeth as his wife rather than opting to be with Princess Bona of France. The only reason that he even made it to the throne of England was due to Warwick, though, and the Kingmaker has taken the dissention as a personal affront against him; considering Edward’s power and the potential for him to rule the country for decades, Warwick is reserving his anger not for his cousin but for Elizabeth, who now must produce a son in order to secure the title for Edward and keep herself safer for that much longer. If she fails to do so, it will surely cost her everything she gained through the marriage to Edward, but on the next episode of The White Queen, neither she nor Edward seem too worried about the possibility of losing their status.

Which, you can’t necessarily blame them, as they’re young, in love, and hopelessly optimistic that things will go their way and that eventually, she’ll win over Warwick. Couple that with the fact that they’re still basking in the glow of being England’s royal couple and you see that they don’t consider Warwick to be a legitimate threat quite yet, not when Elizabeth has shown to be capable of producing healthy male children. All that the two need to do is produce a male heir to the throne and begin carving out their place in English history, but with Edward’s public act of defiance and Elizabeth having alienated the Lancastrians and unable to fit in with the Yorkists, they might have too many enemies for that to be a possibility right now. Could someone get to either Edward or Elizabeth before a (currently hypothetical) child would be born and prevent them from conceiving the next King of England?

The White Queen airs Saturdays at 9:00 on Starz. You can check out a recap of the first episode here.

Who do you think will be the main enemies that Elizabeth and Edward will have to watch out for? Is Jacquetta going to use her magic to help the chances of her daughter producing another son? Should Elizabeth become pregnant with (and give birth to) another boy, would Warwick and company leave her alone for good?