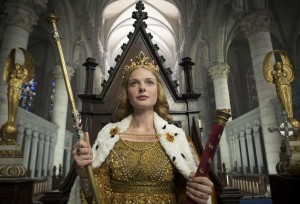 At long last, the war between the House of York and the House of Lancaster is over and there is a new King of England – Edward IV (Max Irons), a devilishly handsome member of the House of York and a man whose connection with master manipulator Lord Warwick (James Frain) proved to be quite valuable. All should be right with the country now; although the House of Lancaster lost their chance to control the throne and, ultimately, all of England, they’ll need some time to regroup and plan their next move. However, coming up on The White Queen, it looks like Edward is playing right into their hand and destabilizing the position of King almost as soon as the crown was placed on his head.

That’s because Edward has fallen in love with a beautiful Lancastrian commoner named Elizabeth Woodville (Rebecca Ferguson), throwing the House of York into a complete and utter tailspin. With Warwick frustrated at her influence over Edward and his reduced role in the King’s life, Elizabeth will now have to struggle to hold onto the crown as fellow Lancastrian Margaret Beaufort and pawn Anne Neville are willing to do anything (and everything) they can to become the Queen of England.

In addition to Irons, Frain, and Ferguson, BBC co-production The White Queen stars Oscar nominee Janet McTeer as Jacquetta, Elizabeth’s mother and a self-proclaimed sorceress; Amanda Hale as Margaret Beaufort, the highly religious mother of Henry Tudor; Faye Marsay as Lord Warwick’s daughter Anne Neville, who takes control of her destiny by marrying the King’s younger brother Richard Duke of Gloucester (Aneurin Bernard); David Oakes as George, Duke of Clarence, brother of Edward; and Caroline Goodall as Cecily Neville, Duchess of York, a granddaughter of John, Duke of Lancaster, she was mother of Edward IV, George of Clarence, Richard of Gloucester, and aunt to Lord Warwick.

Based on the Philippa Gregory novel “The Cousins’ War,” The White Queen premieres this August on Starz.

Will you be watching The White Queen? Do you think that more networks should invest in limited series? Is there a historical era/event that you’d like to see as the subject of a series?