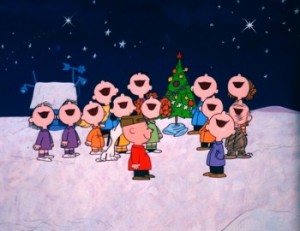 The weather’s getting colder and the days are getting shorter,  so you know what that means? Christmas specials and lots of ’em.

ABC has announced its schedule of holiday programming for the coming weeks and if you’ve been longing to see the Grinch, Charlie Brown, or Shrek one more time, you’re in luck.

On Tuesday, November 27th at 8:00, Dr. Seuss’ How the Grinch Stole Christmas will be trying to bring a little doom and gloom to the Whoville masses for the 46th year, while Shrek the Halls airs at 8:30. They’re filling in for this season of Dancing with the Stars, which will have produced a champion by then, and normally would be leading into the comedy lineup (Happy Endings, Don’t Trust the B—- in Apt. 23) and Private Practice. However, all three aren’t scheduled to air new episodes that night, instead returning on December 4th.

Meanwhile, Wednesday, November 28th will see the return of A Charlie Brown Christmas (and that tiny Christmas tree) at 8:00, with the 7-minute special Prep & Landing: Operation: Secret Santa following. The latter premiered in 2010 and has become a new holiday standard for the network, to the point that it spawned a half-hour special (Prep & Landing: Naughty vs. Nice, debuting in 2011 and yet to be scheduled for 2012). New episodes of The Middle and The Neighbors return December 5th, where each comedy will be having their respective fall finale.