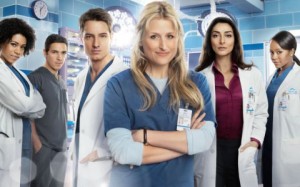 The CW is introducing a whole host of new programming this season, including Emily Owens, M.D.. There are two kinds of shows on the CW Network that with a supernatural or superhero bent to it such as The Vampire Diaries, Supernatural and Nikita and those aimed mainly toward the young adult woman, aged 18-34, such as 90210, Gossip Girl and Hart of Dixie. Emily Owens, M.D., will try for the audience of the latter group along with spring newcomer The Carrie Diaries, while immediate hit Arrow, The Beauty and the Beast and upcoming Cult will try for the competitive slots.

Gossip Girl has already confirmed it’s ending after this season and it’s doubtful 90210 will continue for more than maybe one more, truncated final season to tie up loose ends. So far, The Beauty and The Beast is stuttering in the coveted spot after The Vampire Diaries, but the pairing of Hart of Dixie and Emily Owens, M.D., is looking even more dismal. Emily currently tied with Gossip Girl in the ratings, and yet miles ahead of another fan favorite, Nikita, which is expected to renewed. Nobody said ratings and their resulting programming decisions were easy to understand.

Let’s face it, Emily Owens, M.D., isn’t the best medical show on television. It’s not even the best medical show Mamie Gummer, the series star, has ever been on. She was, after all, also cast as a similarly miserable and downtrodden doctor in Shonda Rhimes and the ill-fated, yet pleasantly viewable Off the Map.

As of this writing, there have only been three airings of Emily Owens, M.D. Each has been better than the last, but it’s been difficult to escape the cliched characters the permeate the halls of Denver Memorial. Let’s start with Emily. She’s the typical girl trying to escape her past, not aware just how far she has come or how capable she is in her new world. Her continual self-deprecation will get old. She knows she has what it takes or she would never have set out on the path to become a surgeon in the first place.

Her supporting cast are also cliche. Two nasties: the world class surgeon they all want to be, Gina, and Emily’s high school nemesis, Cassandra. The angry lesbian (who finally showed some heart), Tyra. The med-school crush who overlooks Emily, Will, and finally the attending physician who is supposedly dorky, but is really kinda hot and who you know will be the one that grabs Emily’s attention in the end, Micah.

Every week, there are medical cases to solve, but Emily’s strength is her bedside manner and she excels when she can somehow put patients at ease while solving their problems. It’s more an emotional ride than a scientific one. It makes more sense for the network and the audience, but without character growth the formula will grow weary quickly. Cassandra can only get away with calling Emily Pits because she sweat through her shirt a couple more times before I start wishing for a scalpel mishap.

The pieces are there, but I don’t think the formula is right for a CW hit. The missing link is romance. Hart of Dixie thrived on it’s Team Wade versus Team George appeal. If the entire show had been about Zoe Hart fighting for her bragging rights as a physician in Bluebell it would have fallen flat. I can’t think of one scripted show currently airing on The CW that doesn’t want you to invest in the love lives of it’s characters. Will Emily Owens, M.D., have a date with destiny or a trip down cancellation street?