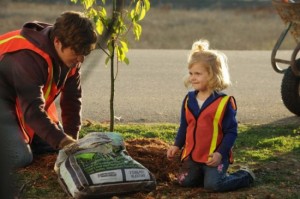 FOX has announced that Raising Hope has been canceled after four seasons and will wrap up its run with a one-hour series finale on Friday, April 4th.

“On behalf of myself, Greg Garcia and Raising Hope’s amazing cast and crew, I would like to thank our audience for tuning in and supporting us over the last four seasons,” said executive producer Mike Mariano. “We planned our Season Four finale with this possibility in mind, and hope our loyal fans enjoy the way we’ve chosen to say goodbye to the Chances and to Natesville.  Thanks again, and we’ll see you in syndication.”

It’s not a surprise that Hope has seen her last days, seeing as how creator Greg Garcia jumped ship for The Millers and the show found itself buried on Fridays after spending three seasons on Tuesdays. In fact, FOX was double pumping episodes for much of the fall, seemingly to get Hope off the schedule and into syndication even faster, so unless the show had especially overperformed, its cancellation was predetermined before the season even began.

The only FOX comedies that haven’t had their fates determined are multi-cam Dads, which aired its season finale in February; military ensemble Enlisted, Hope‘s critically acclaimed Friday partner; and Surviving Jack, which doesn’t premiere until later this month. While it’s possible that decisions on all three will come before the network unveils its fall 2014 schedule this coming May, it seems likelier that their fates won’t be revealed until then, especially if the network is planning on cancelling any or all. Networks tend to try and bury cancellations as best they can, unless it’s a situation like Raising Hope, where the show is less canceled and more concluded.

Will you miss Raising Hope? Do you think FOX is making the right decision in letting the show go? How much of a renewal chance do Dads, Surviving Jack, and Enlisted have?