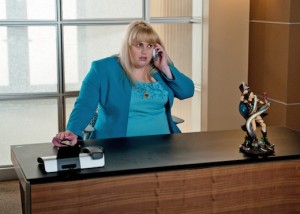 According to The Hollywood Reporter, new ABC comedies Super Fun Night and Back in the Game have been picked up for two additional scripts each. While a script order doesn’t always translate to an episode order, it’s a sign that neither comedy is dead and that the network is still trying to figure out how to handle their glut of mediocrely rated comedies come midseason. The two join Trophy Wife and The Goldbergs in getting script orders, with the Tuesday comedies earning three, but none have yet to secure any type of back order.

Starring Rebel Wilson, Liza Lapira, and Lauren Ash as three wallflowers looking to make their lives more exciting by going out every Friday, Super Fun Night premiered earlier this month following Modern Family, where it earned a 3.2 in the 18-49 demographic. However, the series has seen its ratings drop each week since and most recently pulled a 2.1 in the demo, retaining only about half of its lead-in. ABC wants the show to succeed so they can continue to be in business with Wilson, but Super Fun Night isn’t exactly compatible with the rest of its family comedy night and might find itself moved to another night once the network’s midseason schedule is released in the coming weeks.

Meanwhile, Back in the Game has been the quietest of ABC’s new comedies this season in terms of buzz, though its numbers make it the second highest-rated of the bunch. The series, the latest attempt by the network at bridging the gap between The Middle and Modern Family, debuted to a 2.2 in the demo and saw its most recent episode earn a 1.9. With its DVR numbers uncomfortably low and no sign that the show will receive the same type of push from television critics that Trophy Wife has received, ABC might opt to shift the baseball comedy to Friday night, should they want to give either Trophy Wife or The Goldbergs a chance on a more compatible night. Back in the Game would fit in better with Last Man Standing than The Neighbors and has shown to have a steady audience already, so if ABC wants to either expand their comedy presence on Fridays or try to find a new companion for Last Man, this might be their best shot.

Super Fun Night airs Wednesdays at 9:30 on ABC, with Back in the Game airing earlier in the night at 8:30.

Are you watching either Super Fun Night or Back in the Game? Do you think that either will get a full season? How should ABC program their comedies come midseason?