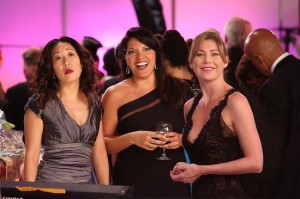 The 200th episode of Grey’s Anatomy was aired on Oct. 10th. “It’s time to put on makeup, it’s time to dress right”, as always, the show starts with Meredith Grey’s words on how bad the hospital needs funds to keep its doors open. There is a fund-raising gala arranged by Avery, to be attended by biggest investors of the town and nobody from the hospital wants to attend. We have the handsome and beautiful doctors, all dressed up and making conversation to win big money for the Grey Sloan Memorial.

It’s a weird party where they have unicycles, fire breathers, face paint, a juggler Shepherd, spiky haired waiters, to name a few, what the hell happened to Jackson’s classy, sophisticated stuff? April loves the magic show and wants to stay but Avery needs ice for the champagne! And all of this arranged, all it took for the fund-raisers to donate money was to see a live surgery! Couldn’t we do it without the fancy gala?

On the other hand the Shepherds are channelizing all their medical energy in competing against each other at home, and now when they get to perform surgeries, it’s like a breath of fresh air! And surprisingly, we saw April and Arizona getting drunk and stupid in the supply room, which was fun. All we have seen of these two in the past is drama and relationship crisis. Back at the circus, Callie is playing her cards with the ‘dead wife’ story, getting more donors.

But, my favorite scene from the episode involved Bailey, who made a witty move to get Richard back to his senses. I hated him when he pushed Bailey away before, when she tries to make her point and he asks her to get out. But that’s what I love about her, her unrelenting spirit to never give up. Richard gets a roommate, Bailey’s cancer patient, who is old and a racist, but doesn’t want to die so soon and finally Richard sees a point that how he doesn’t want to die in the hospital, either, thank God!

Yang asks Owen to start flirting with women, who eventually finds a woman, Emma Marling, completely flattered by Owen. Christina also manages to get a big fat cheque from the guy she flirted all night long, but denies to sleep with him, whereas, Owen scores a date with the pretty Doc. Finally a new love angle in Owen’s life.

Christina comes face to face with her former self in Shane, who helps her, performing a successful heart surgery and tells him that he is a shark and sharks see what they want and never apologize. And guess, who was the patient they operated on, he is Alex’s long-lost drug-addict, high-on-weed father. He hasn’t seen him for a long time so Jo helps him take a paternity test and it’s positive. How she regrets telling him that!

Shane kisses Stephanie after their accomplished night in the hospital and her so-called boyfriend, Jackson walks in. She goes after him and tells him the truth but we don’t see that he cares too much, will this last? So, what did you think about the 200th of Grey’s Anatomy?