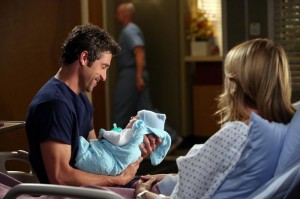 Baby ‘Bailey’ is born, the ER is Ransacked & is it over for Callie and Arizona?

There is a raging storm outside the Grey Sloan Memorial Hospital and the scenario inside is even worse. Just 2 days before the Grey’s Anatomy Season 10 premiere, here is another sneak peak from the 2-hour long episode.

Hunt (Kevin McKidd) tells everyone that with more and more storm-struck patients are being admitted, the ER is running out of supplies and they may have to shut it down. Bailey (Chandra Wilson) is busy pampering baby Bailey, who has just entered the world on a stormy night. Meredith (Ellen Pompeo) declares that she can arrange for some supplies by making some calls to the suppliers and she can leave the bed, when Derek (Patrick Dempsey) asks her to stay right there. Amidst all this, we see Callie (Sara Ramirez) standing in a corner and her wife, Arizona (Jessica Capshaw) in another, trying to avoid each other as much as possible, the tension between them is very evident. Callie has this super-angry expression and as soon as someone mentions the other woman’s name, she blurts out what has happened, leaving everyone aghast. Is there marriage over?  We know from the synopsis that Callie will make a huge decision; will it be separation from Arizona?

Although, we expect a serious and heart-breaking season premiere, there are some good, happy moments with the Shepherds with their newly born baby Bailey. In this season, there will be a guest appearance of actor James Remar of Dexter fame, who is playing Alex’s estranged father. We know that Alex hardly ever mentioned his Dad and if so, he always said that he was a drug addict, hence, their reunion doesn’t seem like a pleasant one.

Grey’s Anatomy will be back on ABC on Thursday, September 26 at 9 p.m.