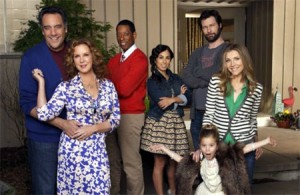 Recent divorcee Polly (Sarah Chalke) is in a tough spot. Given the economic climate, she can’t afford to support herself and her young daughter while living out on her own, but she doesn’t want to move back home with her parents. In her mind, that would be taking an embarrassing step back and there’s no way she’d want to relive her childhood at her age; unfortunately, she doesn’t have a choice in the matter and on the series premiere of How to Live with Your Parents, she’s back to where she started.

It’s not that her parents are bad people, per se. It’s just that she doesn’t mesh well with her manic, vulgar mother and her laidback father doesn’t provide enough counterbalance to make her mother bearable, meaning that until she can get back on her feet, Polly’s going to be pretty uncomfortable. Her Type-A personality functions best when things are orderly and she can have a certain amount of control, but her mother is the complete opposite, a free-spirited, hands-off kind of parent whose ideology often contradicts what Polly’s trying to do with her daughter. That’s going to have to do for now, though, as Polly tries to figure out the next direction of her life and has to trust her parents to watch her daughter while things are sorted out. Will Polly bond with her parents during her transition to the next part of her life?

How to Live with Your Parents premieres Wednesday at 9:30 on ABC.

Will you be watching How to Live with Your Parents? How do you think the show will fit alongside The Middle, Suburgatory, and Modern Family? Can you see the show being renewed for a second season?