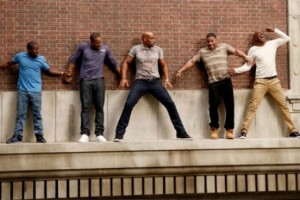 Deadline is reporting that BET has renewed satire Real Husbands of Hollywood for a fourth season ahead of the show’s third season premiere. There’s no word about when the fourth season will premiere or how many episodes will be featured, though it seems likely that the show will return in October for the third straight year.

Created by Kevin Hart (Ride Along) and Chris Spencer (Don’t Be a Menace to Society While Drinking Your Juice in the Hood), Real Husbands of Hollywood is a semi-scripted spoof of Bravo’s Real Housewives franchise, with the central conflict being Hart’s attempts at climbing the Hollywood social ladder. Featuring past guest appearances from the likes of Tamar Braxton, Wanda Sykes, Terry Crews, Bobby Brown, and Katie Couric, Real Husbands of Hollywood co-stars Boris Kodjoe (Madea’s Family Reunion), Duane Martin (All of Us), J. B. Smoove (Curb Your Enthusiasm), Nick Cannon (America’s Got Talent), Nelly (The Longest Yard), and Cynthia Kaye McWilliams (The Lake House).

The third season of Real Husbands of Hollywood premieres Tuesday, October 14th at 10:00 on BET, with the second season reunion airing October 7th. You can check out a preview below.