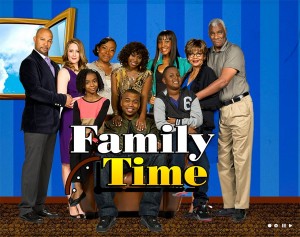 Bounce TV has announced that the 10-episode second season of scripted comedy Family Time is slated to premiere Tuesday, October 14th at 10:00. In preparation for season two, the first season will be encored Tuesdays at 10:00 beginning September 23rd, with a marathon to air October 12th beginning at noon.

Created by Bentley Kyle Evans (Martin), Family Time stars Omar Gooding (Smart Guy) as struggling general contractor Tony Stallworth, who recently relocated his family to the suburbs. Along with his wife, unfulfilled stay-at-home mom Lisa (Angela Conwell), Tony tries to battle with the pressures of everyday life while providing a loving, supportive environment for his children Devin (Bentley Kyle Evans Jr.) and Ebony (Jayla Calhoun). Not making things easier for Tony and Lisa are their families, including Tony’s snobby brother Todd (Christopher Williams) and Lisa’s feisty sister Lori (Paula Jai Parker), but the two have been together since high school and have learned how to survive even the heaviest of storms together.

You can check out a preview of Family Time, which is one of four active black family comedies (the others being black-ish, The Soul Man, and Love Thy Neighbor), below.

Will you be watching the second season of Family Time? Are you disappointed that Bounce waited over two years to air season two? What do you hope to see happen with Tony, Lisa, and company during the next 10 episodes of Family Time?