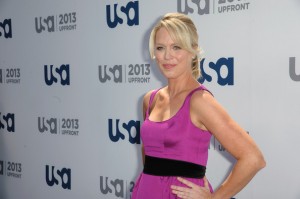 According to The Wrap, Playing House star/co-creator Jessica St. Clair has signed on for a recurring arc on upcoming CBS comedy The McCarthys. She’ll be playing Katrina, described as a loose cannon with zero self-awareness and a character who will act as a love interest for Joey McIntyre’s character. Katrina is slated to make her first appearance in the lives of the McCarthy family in the fourth episode of the series.

Created by Brian Gallivan (Happy Endings), The McCarthys follows a sports-obsessed Boston family whose dynamic gets thrown for a loop when their patriarch Arthur (Jack McGee) taps gay son Ronny (Tyson Ritter) as the next assistant coach for the high school basketball team he coaches. The series also stars McIntyre (The Hotwives of Orlando), Laurie Metcalf (Getting On), Kelen Coleman (The Newsroom), and Jimmy Dunn (Stuck on You).

In addition to her role on the USA comedy, whose fate is as yet undetermined some three months after its season finale, St. Clair has appeared on the likes of Veep, Best Friends Forever, and Review.

The McCarthys is set to premiere Thursday, October 30th at 9:30 on CBS. You can check out a behind the scenes look at the comedy below.

Will you be watching The McCarthys? Do you think St. Clair’s arc on the show is a bad omen for the future of Playing House? Who else would you like to see guest star on The McCarthys?