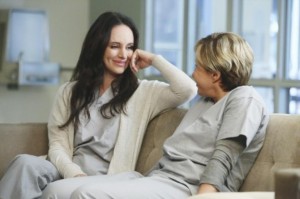 Emily knows that it’s going to take a lot to bring Victoria Grayson down. The Hamptons Grand Dame’s tenaciousness is only matched by the fabulousness of her wardrobe and she’s had years to practice navigating uncomfortable situations and manipulating the sentiments of those around her. Victoria knows how to get people on her side and how to keep herself going through the most trying of circumstances, so while Conrad might talk a bigger game and carry a bigger stick, the Grayson matriarch is the true threat to everything that Emily holds near and dear.

On the fourth season premiere of Revenge, Victoria finds herself trapped in a mental institution with a destroyed reputation. Anything she says about Emily Thorne being a whole other person and coming to the Hamptons in order to exact revenge for David’s murder will be treated as the ramblings of a mentally touched woman who finally succumbed to the familial pressure weighing on her. Emily seemingly found a way to keep Victoria from coming after her by trapping her in the hospital and ruining any chance of having her identity exposed, with the institutionalization serving as the death blow to the air of untouchability that surrounds the Graysons and Victoria in particular. However, Victoria is still alive, breathing, and mentally sane, so now that she has the information she needs about Emily’s real reason for coming to the Hamptons, she’s going to fight like hell to get out of the hospital and give herself a chance to square off with the real Amanda Clarke. But does Emily has a plan of action just in case Victoria makes it back from her sojourn into the mental health system?

Elsewhere on Revenge, David plans his next move after striking against Conrad, while Emily plans to host her most surprising party ever.

The fourth season of Revenge is slated to premiere Sunday, September 28th at 10:00 on ABC. You can check out the season’s official key art here.

Will you be watching Revenge this season? How do you think Victoria will be able to use her seemingly desolate situation to her advantage? Should Emily really be hosting a party at a time when she needs to be on the attack?