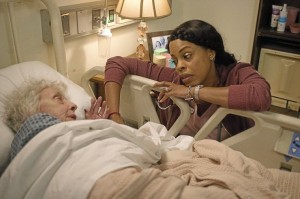 HBO has announced that The Newsroom, The Comeback, and Getting On will all be premiering Sunday, November 9th.

At 9:00 will be the six-episode final season of The Newsroom, which ended its second season with the team from ACN staying and Will getting engaged to Mac on Election Night. There’s no word yet on what events from recent news cycles will be included in the third season of The Newsroom or whether the show will lean as heavily on that device, seeing as how they have a shorter episode order.

Following at 10:00 is the eight-episode second season of The Comeback, which takes place about a decade after the events of the show’s first and only previous season. Former TV it girl Valerie Cherish thinks that she’s figured everything out, but in reality, she’s as clueless about fame, celebrity, and the entertainment industry as she ever was. The acclaimed comedy, which gave Lisa Kudrow an Emmy nomination in 2006, will be returning much of its principal cast.

Closing the night at 10:30 is critically praised medical comedy Getting On, which stars Alex Borstein (MADtv), Niecy Nash (The Soul Man), and Laurie Metcalf (Roseanne) as workers in the geriatric wing of a Long Beach Hospital. The show premiered this past November and built an audience mostly by word-of-mouth, as it aired with a one-off Chris Lilley comedy and had one of HBO’s lowest rated dramas as the night’s lead-in. With the high profile return of The Comeback and the final season of a divisive drama acting as its lead-in, the show now has a better chance at being sampled.

You can check out teasers for The Newsroom, The Comeback, and Getting On below.

Are you disappointed that The Newsroom is getting such a short final season? Where do you think Valerie Cherish is after all these years? Will airing with some support allow Getting On to get sampled?