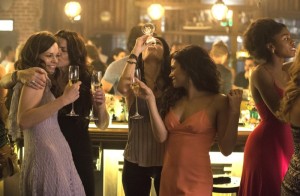 Joanna is by far the most powerful and feared of the Beauchamps, the type of witch whose reputation more than proceeds her. She’s lived a lot of years and while she might be trying to keep a low profile now, more than a few of her lifetimes have been the complete opposite, with Joanna using her powers to get what she wants, protect her family, and give herself the life that she thinks she deserves. With Freya having hit 30, Joanna might want to pull back on her power even more, thereby giving her daughter the chance to live without fear, but on the next episode of Witches of East End, her hand is forced by an outside threat.

That’s because she realizes that Tarkoff isn’t the kind, loving soul that she remembers him as. His attempts at getting closer with her have less to do with his concern over Victor’s death and more about weakening her enough as a witch to kidnap Freya and Ingrid. While Joanna’s power might strike fear into the hearts of those who know only of her destruction, they also paint a gigantic target on her back; those in her realm believe that if they can take her out, the entire Beauchamp line will fall like a house of cards, but no one has been able to get close enough to her to test this theory. Having cloaked East End for the past century, Joanna has done everything she can in order to protect her family – everything, that is, except remind those who might’ve forgotten the extent of her power just how determined she is to remain in East End.

Elsewhere on Witches of East End, Tarkoff exacts revenge upon Frederick, while Freya confronts Killian about the bomb he dropped on her, Ingrid gives Dash an ultimatum concerning his role in two deaths, and Wendy’s relationship with Tommy puts them both in jeopardy.

Will Joanna be able to protect her family from Tarkoff? Should Dash turn himself in for the murders of Kyle and William Hutton? Is Wendy’s relationship with Tommy worth keeping up when it only puts the two in danger?