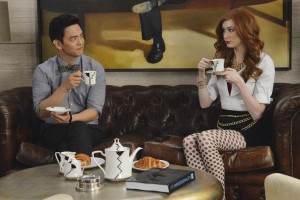 As the fall season quickly approaches, it’s time for the networks to begin the recent practice of releasing certain pilots early. Generally, this is done in order to increase sampling and get the word out about shows that might be difficult to market or too quiet to make a splash in the crowded fall and that’s true this year, as each of the four shows that’ve had their pilots released face certain issues ahead of their debut.

Created by Emily Kapnek (Suburgatory), Selfie stars Karen Gillan (Doctor Who) as vapid Eliza Dooley, a woman so consumed with her social media presence that she’s kind of forgotten how to interact with people in her real life. Desperate to stamp out the loneliness she’s feeling, she contacts marketing guru Henry Higenbottam (John Cho) in hopes of rebranding herself. Starring Ben Feldman (Mad Men) and Cristin Milioti (How I Met Your Mother), A to Z follows Andrew, who works at an internet dating company, and lawyer Zelda as they meet and cautiously begin a relationship despite the vast differences that exit between them.

From Margaret Nagle (Boardwalk Empire), Red Band Society centers on a group of teenagers who live together in a pediatric hospital wing. Despite the abnormality of their situation, though, they experience many of the same feelings and mile-markers that their healthier peers do. Finally, Forever follows star medical examiner Henry Morgan (Ioan Gruffudd) as he tries to hide the secret of his immortality from his co-workers and uses his vast experience in the medical field to impress his new partner Jo Martinez (Alana De La Garza). The show also features Judd Hirsch (Damages), Lorraine Touissant (Orange Is the New Black), and Joel David Moore (Hatchet).

Selfie premieres Tuesday, September 30th at 8:00 on ABC, with A to Z debuting Thursday, October 2nd at 9:30 on NBC. Red Band Society will have its television premiere on Wednesday, September 17th at 9:00 on FX, while Forever will get a sneak preview behind Dancing with the Stars on September 22nd before settling into its Tuesdays at 10:00 slot on September 23rd. Each pilot is also available on their network’s respective website, as well as various on-demand outlets.

Which of Selfie, A to Z, Red Band Society, and Forever do you think had the best pilot? Of the four, how many are you willing to check out a second episode of? Should networks continue releasing pilots early in order to increase sampling?