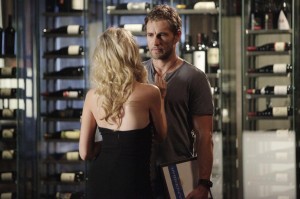 Joss and Harry have been able to maintain a fairly solid business relationship despite the bumps they’ve experienced with the divorce and the difficulties from turning a purely personal relationship into something more complicated. The two have arguably never been closer after working together and getting a business off the ground, yet there remains something unspoken and unresolved between them. Be it sexual tension, feelings that never got explored, or something in between, Joss and Harry are going to have to work through whatever’s been lingering in the shadows since they started spending more time together if they have any hope of co-existing from here on out.

On the next episode of Mistresses, Joss gets into a fight with Harry after she catches him in a compromising position with Greta. While Harry is a single man who can do whatever he wants in his free time, it’s mixing business with pleasure that can not only threaten his own job security, but the security of Joss’s position at Wunderbar, as well. Since Joss pushed so hard for Harry to take over as chef, if something goes wrong with Helena, her head could be on the chopping block right along with Harry’s, so for the sake of her career, Joss needs her former brother-in-law to keep it in his pants and interact with Greta only in a professional setting. However, will Joss recognize that there could be something else influencing her feelings about Harry being with Greta? And if so, will she be willing to confront the reality behind some of her recent interactions with Harry?

Elsewhere on Mistresses, Ben brings startling news that causes some soul-searching in Karen, while April finds herself bound and determined to keep Lucy from finding out the truth about Daniel and Savi’s first “real” date with Zack doesn’t go how either of them expect.

Should Joss be concerned about Harry romancing their boss? What type of news will Ben bring to Karen? Can April protect Lucy from learning the truth about Daniel?