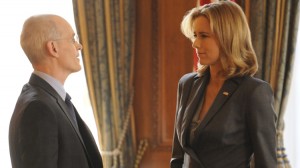 CBS has announced that they’ll be airing the series premiere of political drama Madam Secretary twice on Sunday, September 21st. Due to live coverage of The NFL on CBS, CBS primetime will begin at 7:30 that Sunday, with 60 Minutes airing immediately after the afternoon football game. Madam Secretary will then premiere at 8:30 before reairing at 10:30 – the fifth season premiere of The Good Wife will now air September 21st at 9:30.

The move is the latest unusual tactic employed by CBS in order to drive sampling, as the entire first season of Mom will be replayed on TBS beginning August 26th and extending into September. The only other time in recent memory that airing a pilot twice in one night was used was for the series premiere of The Carrie Diaries in January 2013, so there’s not much in the way of empirical evidence on whether this is the right strategy for CBS to take. It’s an interesting way to combat NFL overrun and possibly test out a show that has the feel of a 10:00 drama in the 10:00 slot, but for the moment, it’s just a wait-and-see decision that could go either way.

Created by Barbara Hall (Homeland), Madam Secretary stars Tea Leoni (The Naked Truth) as U.S. Secretary of State Elizabeth Faulkner McCord and follows the powerful politician as she tackles issues of international diplomacy, interoffice politics, and complex family life. But will the college professor and former CIA analyst accept the offer for a higher position when crisis strikes the White House?

You can check out the trailer for Madam Secretary below, as well as the CBS fall schedule here.

Will you be watching Madam Secretary? Do you think the strategy of airing the series premiere twice will help combat NFL overrun? Should CBS have scheduled the series to air at 10:00 from the beginning?