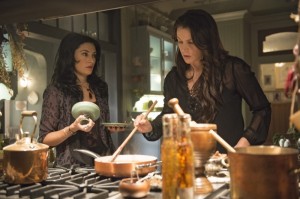 When Killian woke up on the beach in Santo Domingo, he had no idea how he got there or about the events that preceded his departure from East End. All he knew was that a beautiful woman went out of her way to take care of him and that he might not be alive if it weren’t for her. Upon getting to know Eva, he fell in love and eventually married her, both due to his feelings for her and his desire to escape East End. Killian wanted to put as much distance as he could between himself and Freya, Dash, his mother, and anything that made him feel less than, but could he have been wrong all along?

On the next episode of Witches of East End, Killian begins doubting the validity of his feelings for Eva. He thought that she was his salvation, the one person he could lean on after a lifetime of being a lone wolf, yet she shoved the fertility potion at him on several occasions and used it to get herself pregnant with the baby that he doesn’t even know about. If she can be that deceitful to him and not even give him a choice in whether they have children, let alone her as-yet-unknown motivations for getting pregnant in the first place, perhaps Killian’s strong, passionate feelings for her are magically induced and have no basis in true emotion. And if that’s the case, maybe he’d be better off in getting rid of Eva once and for all, pregnancy or no pregnancy.

Elsewhere on Witches of East End, an old friend of Joanna’s emerges after some time away, while Wendy encounters someone from her past at an art gala.

Why do you think Eva so desperately wants a baby with Killian? Does Joanna’s old friend arriving in East End have to do with Victor’s recent death? Will Wendy welcome the visitor from her past or is this person someone she would rather forget?