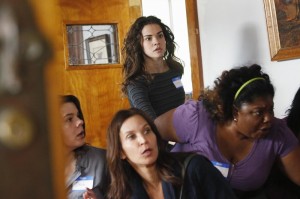 Though she’s still unable to view herself as a success story, Callie wouldn’t have made as progress as she has without her stint in Girls United. It might not have been a long stint, but it allowed her the chance to reprioritize and to gain perspective on her life with Lena and Stef that she wouldn’t have gotten had she made it to Indiana. That progress has shown the other girls from the home that it is possible to overcome bad things in your life and that a quality forever home could be out there for them, but given the destruction of the home, Callie wants to find a way to help the girls even more.

On the summer finale of The Fosters, Callie calls in a favor with Robert and gets him to host a fundraiser for Girls United. If they raise enough money, there’s the possibility that every girl from Girls United will get to leave juvie and come back together, but the chances of that get diminished when, as she’s putting together the fundraiser, Callie finds herself betrayed by someone she trusted. Not only will it impact the fundraiser and the lives of those the fundraiser stands to benefit, but it could negatively impact Callie’s relationship with Robert just when the two were getting closer. Will Callie be able to salvage the fundraiser, as well as her relationship with Robert, or is everything she worked for about to crumble around her?

Elsewhere on The Fosters, Lena makes a life-changing decision when she learns the extent of the pressure facing Connor, while Someone’s Little Sister is pushed to the brink by tensions between Brandon and Lou and Jesus is forced to evaluate his relationship with Hayley when he receives a visitor from his past.

What type of betrayal will Callie suffer while working on the Girls United fundraiser? Can Someone’s Little Sister survive the tension that exists between Brandon and Lou? Who will come back into Jesus’s life to force him to examine his new relationship?