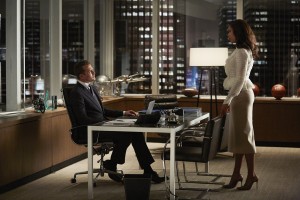 USA has announced that legal drama Suits has been renewed for a 16-episode fifth season that will premiere sometime in 2015.

“Suits continues to fire on all cylinders, delivering provocative storytelling and complex characters that viewers can’t get enough of,” said Chris McCumber, President of USA Network. “With some of the best writing on television, and a brilliant ensemble cast, we anticipate a spectacular fifth season for a series that has become a marquee property for USA.”

Having stayed in the top 10 of summer scripted series in the 18-49 and 25-54 demographics, as well as total viewers, the renewal for Suits was a fairly easy decision to make for USA. However, the network still has quite a ways to go in terms of renewal decisions, as veterans Graceland, Covert Affairs, and Royal Pains are all currently without a renewal. Also looking for word on their fate are new comedy Playing House, which has already finished its first season, and new dramas Rush and Satisfaction. While there will be a delay on the latter two as the network continues to look at time-shifted viewing, a decision on the veteran dramas should come sooner rather than later.

Suits joins a 2015 lineup that includes comedies Benched, co-created by Michaela Watkins (Trophy Wife) and starring Eliza Coupe (Happy Endings), and Sirens, which was renewed for a second season earlier this summer.

Suits airs Wednesdays at 9:00 on USA, with the midseason finale coming August 20th. You can check out the TVHackr pages for Suits stars Gabriel Macht and Patrick J. Adams here and here.

Have you been watching Suits this season? Where would you like the story to go come season five? How do you think the rest of USA’s renewals will go?