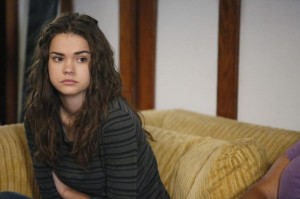 During her visit to Girls United, Callie was reminded of just how much progress she had made since her time in the group home. She might not be aware of it and she might try to downplay it when people bring it up to her, the latter likely due to the pressure to live up to the reputation of being a “success story,” but that doesn’t change the fact that she’s not the same girl she was when she arrived at the Fosters, nor is she the same girl that first walked into Girls United. Yet Callie’s sensitivity and troubled past have made the progress she’s achieved feel unstable, as if it could all come crashing down around her at a moment’s notice.

On the next episode of The Fosters, Callie continues her forward march toward wellness by working through her issues with sex. Or at least she thinks she’s figured out her issues, as an encounter with someone from her past strips away the work that she’s been doing and then some, leaving Callie feeling like she was before Lena and Stef took her in. Scared, angry, and looking to shut herself off from the world, this is when Callie can show that she’s a success story; if she can somehow deal with the negative emotions this encounter brings up and emerge on the other side without having to run away, she’ll show that Rita and the rest of Girls United were right about how far she’s come and about how much she’s learned in the past six months. Is Callie ready to tackle problems that would have sent her scurrying in the other direction even one year ago?

Elsewhere on The Fosters, Mat’s idea to take Mariana to a Mexican street festival for their first date has inadvertent consequences, while Hayley wants Jesus to prove that he’s looking for more than just sex and Mike helps Ana make plans to right her past wrongs.

Will Callie be able to make up for the ground she loses after her scary encounter? Should Mariana continue to see Mat, even with the disastrous run of dates that they’ve been on? Why has Jesus stayed with Hayley despite knowing that she’s lied to and manipulated him?