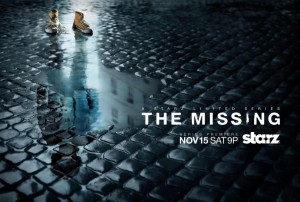 Starz has announced that eight-episode limited series The Missing is set to premiere Saturday, November 15th at 9:00.

Created by Harry and Jack Williams (Roman’s Empire, Full English) and directed by Tom Shankland (Ripper Street), The Missing follows Tony Hughes (James Nesbitt), a father whose five-year-old son Oliver goes missing while on vacation. Desperate to locate his son, Tony enlists the help of a local detective in his quest to bring those responsible for Oliver’s disappearance to justice, no matter the cost. Even if it means fracturing his marriage beyond repair and losing what sanity he’s managed to hang on to since Oliver disappeared.

The Missing will be the second fall series for Starz, as basketball comedy Survivor’s Remorse begins its six-episode run in October. The network has amped up their number of scripted hours in 2014 and should continue that well into 2015, thanks to the success of Power, Black Sails, and Da Vinci’s Demons and upcoming projects Blunt Talk and Flesh and Bone. Given the success of The White Queen and the fact that The Missing is a co-production with BBC, it seems likely that at least one international series will premiere on Starz sometime within the next calendar year, as well.

You can check out a behind the scenes featurette centered on The Missing below.

Will you be watching The Missing? What will Tony ultimately give up in order to get his son back? Is there a possibility that, rather than being abducted, Oliver ran away from home?