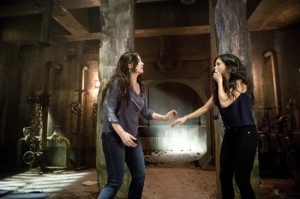 Freya is in a vulnerable place right now with the loss of her father, the uncertainty surrounding her brother, and the disappointment in Killian being married. Not that long ago, she seemed to have everything working in her favor, but now she’s dealing with tragedy and feels as if she has no one to turn to. Ingrid is busy helping Dash hone his powers, Joanna is too wrapped up in her own grief to help her daughters, and Wendy doesn’t know how to deal with this side of death, so it makes sense that Freya would retreat to her comfort zone and look for a way to be with Killian without being able to be with him.

On the next episode of Witches of East End, Freya relives a past life that she shared with Killian, a way for her to be with him without being able to be with him. In her time of crisis, Killian was the one she was able to fall apart around, the one that she felt comfortable enough to admit her fears to, but as he’s still married to and very much in love with Eva, there’s nothing Freya can do with regards to getting back together and pursuing anything more than friendship. Therefore, reliving the past life will allow her to find the comfort that she can’t receive from present day Killian while preserving his marriage and keeping herself from falling down the rabbit hole of drama that getting between him and Eva would open up. But will getting a taste of what a life with Killian would be like actually prove comforting to Freya? Or will it make her long for a time when she could have him all to herself and make being around him while he’s still married all the more painful?

Elsewhere on Witches of East End, Dash conducts a spell without realizing its consequences, while Joanna gets into contact with an old friend and Wendy goes after the Mandragora with Frederick.

Will Freya reliving a past life bring her closer to Dash? What type of consequences will the spell that Dash conducts have? Why is Joanna looking to an old friend to help with a problem in East End?