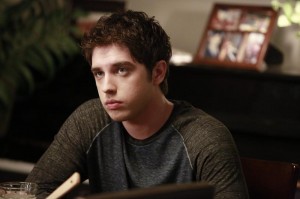 Neither Wyatt nor Callie know why she had the reaction she did when they were in bed together. While Callie seems to believe her reticence to have sex with Wyatt means that she’s still hung up on Brandon, a thought that completely ignores that her time with Wyatt was her first intimate encounter since Liam, Wyatt is left with no leads and doesn’t know how to get Callie to open up to him. The two might be close, but she’s still uncomfortable with allowing herself to be vulnerable, so Wyatt is going to have to find someone else to help him reach his girlfriend.

On the next episode of The Fosters, Wyatt approaches Brandon asking for advice and gets turned away, something that will likely further his suspicions that things are back on between the eldest Foster and his would-be sister. Brandon, who continues to claim that Callie is nothing but his sister and that there’s no chance of them becoming anything more, could have very easily helped Wyatt with his situation, but instead, he chooses to be petty about “losing” Callie, as if there was ever a possibility that he could date his adopted sister. By choosing to treat Wyatt like he did, he might have put another fracture in Callie’s new relationship and sabotaged a real chance for his future sister to be happy, to have someone in her life who supports her whole-heartedly. And considering how guarded Callie is and how difficult it is for her to trust after years in the foster system, getting in the way of any relationship, be it friendship or otherwise, is pretty despicable.

Elsewhere on The Fosters, Stef confronts Mike about Ana and receives an answer about where he was the night of the disappearance, while Mariana continues to take her frustrations with the situation she’s been put in out on Jesus.

Do you think Brandon should help Wyatt with Callie or leave him to his own devices? Where do you think Mike was the night Ana disappeared? Will Jesus be able to make things right with Mariana, Emma, and Hayley?