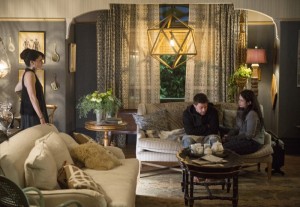 Joanna’s brush with death likely played a role in determining her reaction to Frederick’s arrival in Fair Haven. In a vacuum, it makes sense that she would be so emotional and overjoyed at seeing her son following years apart, but knowing that she was inches from giving up her immortality and losing the battle against the argentium made her that much more appreciative of seeing him, even after everything that happened in Asgard. Now that her family is back together, more or less, Joanna believes that the worst is over and that everything might just work out in the end, but the question remains: can she really trust Frederick?

On the next episode of Witches of East End, Joanna and Wendy continue their disagreement regarding whether to side with Frederick. While Joanna is trusting that her boy is in town with no ulterior motive, Wendy doesn’t think that he’s being honest about his intentions, not after he betrayed them the first time in Asgard. It’s fair to question whether Frederick is in Fair Haven for more than just a passing visit, especially since he went to the trouble of absorbing the argentium in order to cure his mother, yet Joanna’s mind isn’t even open to the possibility that his presence is town is nefarious in nature. She doesn’t want to entertain the thought that her son could turn against her, not when she’s at her most vulnerable, but if she deliberately turns a blind eye to her past with her son, she might be putting her family in a precarious position that they’ll have to fight their way out of.

Elsewhere on Witches of East End, Killian discovers just how much he has in common with Eva, while Dash reluctantly deals with his blackmailer.

Do you think that Joanna should trust Frederick after everything that happened in Asgard? Why would Frederick step through the portal if not to exact revenge on his family? Who could be behind the blackmailing of Dash and what could they want?