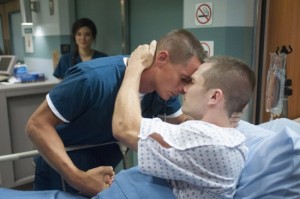 Variety is reporting that medical drama The Night Shift has been renewed for a second season by NBC. The second season of the series will be expanded from the eight episodes it received for its first season to 14, though it’s unknown if the show will be held for summer or used as a midseason replacement.

It’s been a fairly strong summer for NBC thus far, with The Night Shift being renewed, Undateable in the renewal conversation, Taxi Brooklyn surprising, American Ninja Warrior remaining sturdy, and America’s Got Talent doing what America’s Got Talent does. Should the network find another keeper in its next rush of programming, which includes comedies Welcome to Sweden and Working the Engels and reality series Food Fighters, NBC will have quite a bit of momentum heading into the 2014 fall season and could possibly make strides towards securing its second consecutive seasonal victory.

Created by Gabe Sachs and Jeff Judah (90210), The Night Shift follows the lives of the staff who work the night shift in the ER at San Antonio Medical Center. Having averaged over six million viewers since its May 27th series premiere, The Night Shift stars the likes of Eoin Macken (Centurion), Jill Flint (Garden State), Ken Leung (Lost), Daniella Alonso (Revolution), and Freddy Rodriguez (Six Feet Under).

Have you been watching The Night Shift? Do you think NBC should keep it a summer show or would you like to see it as a midseason replacement? Will the expanded episode order help the show creatively or could it cause the series to stretch itself too thin?