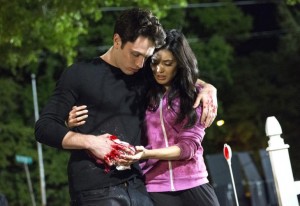 Marisol was inches from receiving the name of Nick”s first victim, only to fumble when it came time to give her new husband another dosage of his pain medication. Just when she thought she could take a breath and begin living a normal life after what happened with Flora and Eddie, she realized that there”s no such thing as normalcy and comfort in Beverly Hills, that this was a town built on secrets and the backs of those pushed down so that others can rise to the top of the socio-economic food chain. As such, her concern is less about weaving her way through town in order to find answers, lest her activity be picked up on by her husband, and more about learning the truth as quickly as she can.

On tonight”s episode of Devious Maids, Marisol confronts Opal about Nick”s first victim and threatens to call the police on online casino australia the maid if she refuses to talk. Marisol always had a funny feeling about Opal, so leaning on her like this is a win-win situation. If Opal talks, she gets the firepower necessary to battle Nick and fully separate herself from the man she thought she knew; if Opal doesn”t talk, she gets rid of the biggest wildcard in her life and cuts Nick”s support system down, something that could force him to either confess his sins to her or leave town for good. But as much as Marisol wants to know the truth, is she ready to learn what happened the first time Nick took a life?

Elsewhere on Devious Maids, Adrian learns the truth about Tony, while Rosie goes to Kenneth regarding her suspicions about Reggie, Valentina struggles with the decision on whether to turn Ethan in, and Carmen tries to help Spence when the drinking interferes with his job.

Will Opal divulge information about the first person Nick killed? Who do you think Tony Bishara really is? Should Valentina turn Ethan in?