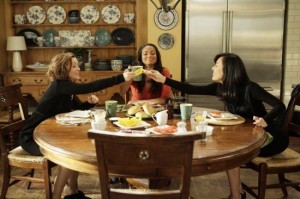 It took a lot for April to go back to Sexy Smoldering (aka Daniel) after the first encounter the two had. She’s just not one to be spontaneous and to do something that she’ll regret in the morning, but it was the type of moment she needed to have – an uninhibited, selfish moment where she indulged and thought of herself before anyone else for once. Her dip into the world of casual sex paid off, though, when she bonded with Daniel during their 48-hour sexathon and found that there was more to him than rippling abs and pulsating creative energy. April might not be falling in love just yet, but she’s intrigued and after everything that happened with Paul and Richard, she deserves the chance to explore something like this. But how will the girls react when they come face to face with the infamous Sexy Smoldering after hearing about his romp with their best friend?

Monday, June 16th – “Open House”
Joss is caught in the middle as mediator when Savi and Harry – still not talking to each other — clash over selling their home. Back at the office, Toni (guest star Rebeka Montoya) continues to be a thorn in Savi’s side. When April learns she has to throw a lavish party for the parents at Lucy’s expensive new private school, it’s Mickey (guest star Joseph May) to the rescue with a bash that no one will soon forget.

Monday, June 23rd – “Friends with Benefits”
Savi finds a surprising connection with a man (Jason Gerhardt as Zack) other than Dom. After a series of dating disasters, Karen hits rock bottom emotionally. April introduces Daniel (guest star Ricky Zamora) to the gang. Joss shells out big bucks so she and Harry can attend a pricey charity event to drum up business, but ends up attracting something else instead, the attentions of a handsome plastic surgeon (guest star Justin Hartley).

How do you think the girls will behave around Daniel? What type of connection will Savi find with a new man? Can Joss and Harry co-exist as business partners while he’s dealing with personal issues?