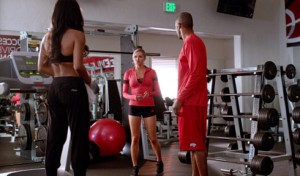 For much of her adult life, Ahsha has played it safe and done what she thought she should do rather than what she wanted to do. Although that line of living has put her in the position she’s in right now, turning her from an unknown into potentially the next Jelena Howard, it’s not a way she wants to continue operating, not when it could get in the way of her feelings for Derek. She knows why a relationship with him isn’t the smartest thing (e.g. it could cost her a place on the squad, he’s got an especially checkered past, etc.) and the old Ahsha would have gone the other way and never looked back, but the new Ahsha wants to see what all this is about before completely dismissing the idea of being with the Devils star.

On the next episode of Hit the Floor, Ahsha and Derek nearly get caught in the act by Kyle, a tiny relief since she’s the only person who knows about their relationship in the first place. However, Ahsha is already jittery enough so even hugging Derek in public is something she doesn’t want to do, not when it could generate gossip around the organization and invite more scrutiny around the way the two conduct themselves. As much as she wants to be with Derek and as ready she is to let down her hair, Ahsha just doesn’t have it in her to risk her job for a maybe, for a relationship that could dissolve before her eyes in a month and leave her with nothing. For the time being, at least, Derek is going to have to be okay with keeping things private, but how long will he be willing to conduct his relationship in the shadows?

Elsewhere on Hit the Floor, Pete goes public with his relationship with Raquel, while Zero begins focusing on Jelena, Sloane continues her investigation of Oscar, and German clashes with Derek on his first day on the job.

Do you think Ahsha and Derek will be able to hide their romance for very long? What ulterior motive could Zero have in going after Jelena? Will German and Derek be able to co-exist in the Devils organization?