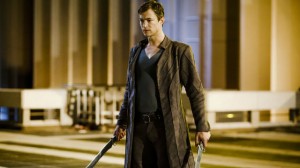 Somewhat lost amid the yearly feeding frenzy that is the broadcast network upfronts is the fact that some of the most popular channels in the cable realm also just released the first looks at their newly ordered series. Here are two such offerings from Syfy.

First up is Dominion, a sort-of sequel to the 2010 supernatural action/horror flick Legion. Scott Stewart, the film’s co-writer and director, will executive produce the series, which picks up roughly a quarter century after the events of the film.

Second on the docket is Ascension, a six-hour event series set in an alternate version of Earth, one in which President John F. Kennedy launched a classified mission in 1963 that sent hundreds of Americans into space on the titular starship. The objective was to find other inhabitable planets in the galaxy, and colonize them. Now, 50 years into the journey, someone or something is threatening their continued survival. Space opera vet Tricia Helfer (BattleStar Galactica) toplines the cast. Ascension will mark Syfy’s first miniseries venture since 2009.

Dominion premieres Thursday, June 19 at 9/8c. Ascension bows this November, and will run through December. Another high profile upcoming project, an adaptation of the critically acclaimed 1995 Terry Gilliam film 12 Monkeys, has been scheduled for January 2015, and stars Aaron Stanford, Amanda Schull, and Noah Bean.