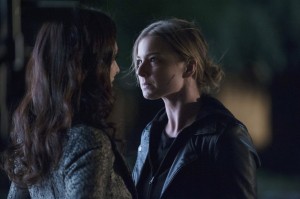 Ever since Emily Thorne arrived in the Hamptons, she had two main targets in her quest for vengeance: Conrad and Victoria Grayson. While others crossed into her path along the way and her venom was eventually reserved for Daniel Grayson, Conrad and Victoria bore the brunt of her fury for their roles in getting her father sent to prison for a crime he didn’t commit. Due to her own anxiety about finally finishing the job, the arbitrary deadline that Jack gave her lingering in her head, and the blackouts that took her out of commission for a while, Emily’s journey sped up in recent weeks on Revenge, culminating in a kidnapping plot that forced the great Conrad Grayson behind bars. But what about Victoria?

On the third season finale of Revenge, Emily gets to direct the full extent of her ire toward Victoria and launches a full-scale attack on the Hamptons queen. However, Victoria isn’t coming into this battle unarmed, as she’s one step away from figuring out that the woman she knows as Emily Thorne is actually Amanda Clarke, a revelation that would change the game for each woman. Emily would no longer be able to operate in the shadows, though Victoria figuring out her secret could give her the incentive to finish what she started, while Victoria isn’t exactly drowning in allies at this moment; even if Victoria wanted to bring down Emily, regardless of her connection to David, she has neither the resources nor the manpower to make that happen. But we’ve seen that Victoria will do what she has to in order to survive when her back is against the wall, so if it’s either her or Emily, she’ll figure out a way to put up a hell of a fight.

The third season finale of Revenge airs Sunday at 10:00 on ABC.

Do you think Victoria will piece together that Emily Thorne is actually Amanda Clarke? How long will it take for Emily’s role in getting Conrad sent to prison to come out? What will Revenge look like if Emily’s secret is uncovered by Victoria?