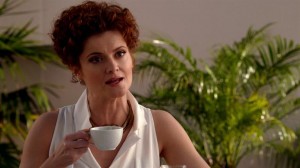 Though she and Adrian spent three months reconnecting in South America, Evelyn’s feelings for her husband were obliterated after the break-in. It wasn’t even that her necklace was stolen or that their sense of security was violated by the presence of the masked robbers; it was that Adrian fell apart in the days afterward, retreating into his fear and not doing his duty as a husband when it came to protecting her in dangerous situations. Evelyn has forgiven a lot when it comes to Adrian, but in exchange, she needs him to make her feel valued, to show her that she carries some importance in his mind. And him becoming a paranoid worrywart and refusing to get out of the car when the two went after her necklace show her that he’s never going to put her interests before his own.

Sunday, May 4th – “Dangerous Liaisons”
Marisol discovers shocking news about her fiancé and Opal; Rosie takes Kenneth to a specialist who offers them newfound hope; Carmen prepares for her performance debut; Genevieve invites Zoila to a luncheon; Valentina struggles to get over Remi; Evelyn finds comfort in someone other than Adrian.

Sunday, May 11th – “Crimes of the Heart”
Marisol suspects Nicholas may be hiding a secret; Genevieve encourages Zoila to take a date to a family event in order to make Pablo jealous; Evelyn tries to spend more time with Tony by driving Adrian out of the house; Carmen’s new job leads to conflict between her and Rosie; Valentina and Ethan get closer; Genevieve gets some unexpected news about Remi.

Sunday, May 18th – “The Bad Seed”
Nicholas gets jealous over Marisol’s close friendship with her book editor; Lucinda crosses the line with Rosie; a new visitor creates problems for Carmen; Tony makes a decision that troubles Evelyn; Valentina and Ethan get into a complicated situation.