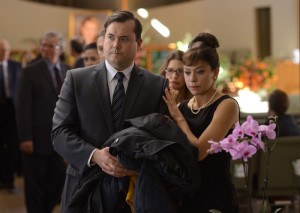 Sarah thought that her main nemesis in the fight for Kira would be the Dyad Institute, with Rachel Duncan being the Big Boss she needed to defeat in order to get her daughter back. Her reasoning for this line of thinking was sound, as Rachel had the leverage she needed to force her into the Dyad’s offices, but it turns out that Dyad didn’t have anything to do with Kira’s disappearance. It’s the Proletheans, the same dangerous religious cult that Helena was raised in and an enemy that Sarah might not know how to effectively combat.

On tonight’s episode of Orphan Black, Sarah enlists Art to help locate Kira, as both Cosima and Alison have their own issues to deal with and Fe doesn’t have the resources she needs in order to bring her daughter home. The question, though, becomes how much information she gives Art about Kira’s disappearance and the connection she has to Beth, Katja, Cosima, Alison, and Helena; he knows that something’s up anyway and she nearly broke down and told him when the cops hauled her in last season, but while she trusts him enough to rely on him in this instance, she’s likely going to choose her words and what details she gives him carefully, at least until she knows he’ll keep the truth close to the vest. But how will the police even infiltrate the Prolethean compound, likely where they took Kira after the sojourn to the motel, and retrieve the girl without suffering any collateral damage on their end?

Elsewhere on Orphan Black, Alison grapples with the guilt she has from Aynsley’s death, while Cosima struggles with the worsening symptoms of her mysterious illness.

How much information will Sarah give Art in their search for Kira? Will Alison ever be able to get over her role in Aynsley’s death? What will Cosima find out about the illness that’s been plaguing her?