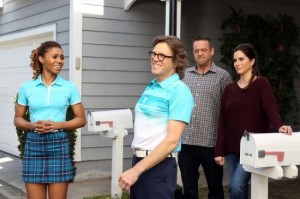 With the Zabvronians preparing to return back to their home planet, there’s a garage sale to get rid of the excess they’ve acquired in their time on Earth. While Jazzy Jeff continues rejecting Mary Lou Retton at the sale, changing her price tag from $100 to Cheap, Larry and Jackie go over everything that’s happened since Jeff came to this planet and the rough situation they’re currently looking at. After confirming to Reggie that he hid the pill that will turn his son human, Larry nearly doubles over due to his left arm becomingly uncomfortably tingly; he can’t seek medical attention, though, due to the Weavers coming out onto the street looking for Max and Abby. The two left a note saying they were running away to outer space and some pressure from Larry causes Dick to give up their location – a box marked “Pots,” which they crawl out of.

Debbie and Marty return to their home where she laments having to say goodbye to her best friends over one little fight and he breaks out the pregnancy test he found in their trash. Since their sex life isn’t especially active, Marty’s shocked at this latest development, moreso when he learns that it’s not Debbie who’s pregnant. Suspicion turns to Amber, who is busy listening to Reggie rant about Larry not allowing him to become human. She tries to make him realize that it’s a tremendous step to become a human, which would cause him to lose what makes him him, but Reggie is determined to find the pill and enlists Ginger LoJack Dick, with his heightened sense of smell, to locate it and bring it back to him. Meanwhile, Larry and Jackie attempt to go through the stuff they’ve collected since arriving on Earth – the toothpick sculpture Larry did of Marty, the animated gingerbread man Larry used on a PTA member that was giving Debbie a hard time, Dick’s Halloween-ween Marty puppet – and Jackie can’t bear it. She doesn’t want to leave Earth and as she goes through Dick’s baby clothes, Larry heads to the bathroom to wash his face, where’s he’s soon joined by Dick.

Dick sniffs out Larry’s pregnancy and tries to be a voice of encouragement for his father, telling him that the third time could be the charm. Larry’s worried about the fact that no Zabvronian has ever given birth in their human form, his mind wandering to where the baby would come out and how he would hide the bump from the non-Weaver humans, and Dick tells him that he’s focusing too much on himself and not enough on the baby inside him. Elsewhere, the Weavers confront Amber about the pregnancy test and when they’re shut down, they face the idea that the test belongs to a member of the Bird-Kersees. When they take the test next door, Jackie realizes that Larry has been exhibiting Zabvronian pregnancy symptoms (moodiness, depression, heart attack-like) for quite some time and he comes downstairs to confess that he’s indeed with child. Although the mood in the room jumps tremendously, the Weavers mostly giddy about the baby belonging to no one in their household, Jackie now understands Larry’s push to head back to Zabvron.

Debbie jumps in to give Larry a pep talk, telling him that he’s the Supreme Leader for a reason, that he’s not going to fix his problems by running back to his home planet, and that she and the rest of her family would follow him anywhere. Meanwhile, Amber interrupts Reggie’s search for the pill by showing him a copy of Everybody Poops. The intention? To show him that if he becomes human, he’s going to poop; he’s going to lose his hair; he’s going to become old; and he’s going to die. As much as she loves him, she doesn’t want his decision to face his own mortality to be on her. Outside, the Zabvronian space ship is open and Jeff prepares the rest of the colony for their journey home, assuring them they need only take the bare necessities. He’s interrupted by Larry who, with the support of Marty, Debbie, and his very own Michelle Obama Jackie, gives a speech about how happy the aliens were before Jeff arrived and how he’s not going to leave this planet before his mission is over. He pleads with them to stay with him, continuing to explore this planet and deepen their relationship with the Weavers, and just as it looks like they’re about to side with him, he informs them that he’s going to have a baby. The tide then turns and the colony decides to return home – Kareem Abdul-Jabbar wants Zabvronian Starbucks, Mary Lou Retton kisses Larry before boarding the ship, and Johnny Unitas has already gotten started on his Team DJ Jazzy Jeff t shirts.

Just then, Grandfather calls Larry, having heard about the pregnancy. He begins telling his son that despite how much of an embarrassment he is and despite the fact that they’ll likely never speak again, he’s proud of him – except that he doesn’t get around to the second part after receiving another call and getting off the line. The ship leaves for Zabvron and Larry returns home to find his family and the Weavers crowded around Abby’s bassinet. He tells Dick and Reggie to go to Harvard and become human, respectively, and Jackie steps in to remind him that even though he’s wrong quite a bit, he’s always confident about the decisions he makes, which she loves about him and which causes her to never doubt him. But Larry’s worried about being all alone on Earth now and after the Weavers assure him they’re not going anywhere, Reggie and Dick eschew their dreams to stick by their father. As such, Larry tells them all that even though their future is uncertain, he knows that whatever they’re going to do, they’ll do it all together.

The following day, though, the remaining members of the community notice how many empty houses there are and sure enough, a human couple moves in next door.

Additional thoughts and observations:
-“Plus, it’s smart to catch up those two Tim Allen fans who accidentally tuned in.”
-“Stop talking like you’re in a Kate Hudson film.”
-“And now…you’re just going to be another Asian guy.”
-“Oh my God. Yes. So pregnant.”
-“I can change myself, woman. Hands off the merchandise.”
-“I think someone must have left a hole in my cat bag.”
-“Anyways, meow.”
-“The things that come out of my mouth this season…”
-One more time for good measure: Why ABC Should Renew The Neighbors.
-This Week in Neighbors Meta Commentary: Aside from the comments above about Tim Allen fans and all the insanity that Debbie has been dealing with this season, there was Larry’s “And the critics thought we’d never last” while he was looking over the remnants of his journey to Earth and his speech to his family about how he didn’t know where they’d end up. The latter included suggestions of Wednesday from Jackie and Reggie informing them he heard whispers about ABC Family.
-On that subject, the show never should have left Wednesdays in the first place. As far as rumors of ABC Family, I wouldn’t mind it, as long as The Neighbors was still allowed to be The Neighbors and they were assured enough episodes to make it to syndication.
-I assumed that the phone call that Grandfather took toward the end of the episode would have come back in play, since it looked fairly distressing. Maybe that’s something that would reappear sometime next season, assuming there is a next season?
-Although it was sad to say goodbye to the other Zabvronians, all of whom I enjoyed having back on the show in recent weeks, I would be fine with the gingerbread man being their replacement. I had forgotten about the episode it came from, so showing it in Abby’s bassinet was one of my favorite reveals of the entire season. It also made me think of Shrek, in a good way.
-I like how this episode took a sitcom trope (the randomly found pregnant test) and gave it a little twist with Larry being the one pregnant and his reaction to the news being fairly positive. This season of The Neighbors has done a lot of interesting stuff with structure and the sitcom format as a whole and this was no different.
-Favorite episode of the season? I’m partial to “Challoweenukah” or “The One with Interspecies F-R-I-E-N-D-S,” but the 5-6 episode run that the show had to conclude the season was exceptionally strong.
-If the show is renewed for a third season, can we please get a flashback to baby Dick? The idea of his first words being “I can change myself, woman.” is too delightful to not get a visual of.
-The music playing under Debbie’s pep talk to Larry was from Bridge Over the River Kwai. As much as shows like Community and 30 Rock were commended for their pop culture IQ, I’d put The Neighbors against either one in that category, especially this season. And it’s never felt gratuitous, which is impressive considering reference-heavy humor can easily descend into empty pandering. This show avoids that by simple randomness or by using pop culture to inform its characters, the latter especially affecting when it relates to the isolation the Bird-Kersees feel on Earth.
-The shot of Kevin the Alpaca looking directly into the camera was my biggest laugh of the night. He’s the member of the colony I’m going to miss the most, I’m afraid.
-I’m very curious how the show would write around the other humans in the community in a third season. Would more people find out about their secret? How would the Bird-Kersees explain the new baby if Larry is able to cover his bump? Could the new neighbors, played by Full House duo Candace Cameron Bure and Scott Weinger, have secrets of their own?
-So…what hole would a Zabvronian baby come out of?
-Thank you guys for reading my coverage of The Neighbors. Although I didn’t begin writing about the show until 5-6 episodes ago, I’ve loved the show since the very beginning, so it’s been nice to get a chance to help spread the word about how great it is to whoever will listen. There’s about a month left until we’ll be finding out whether this show gets a third season, but even if it doesn’t, The Neighbors is the rare show that went out 100% on its own terms and ended things in a way that was as human as any other comedy on television. 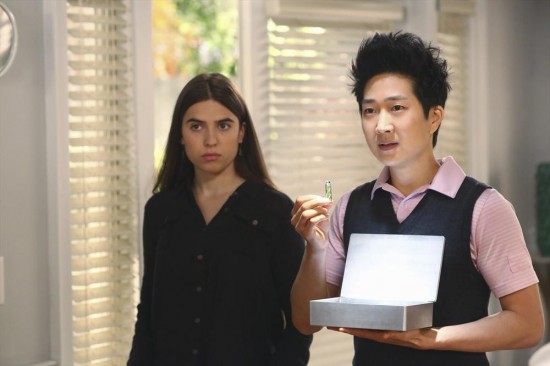 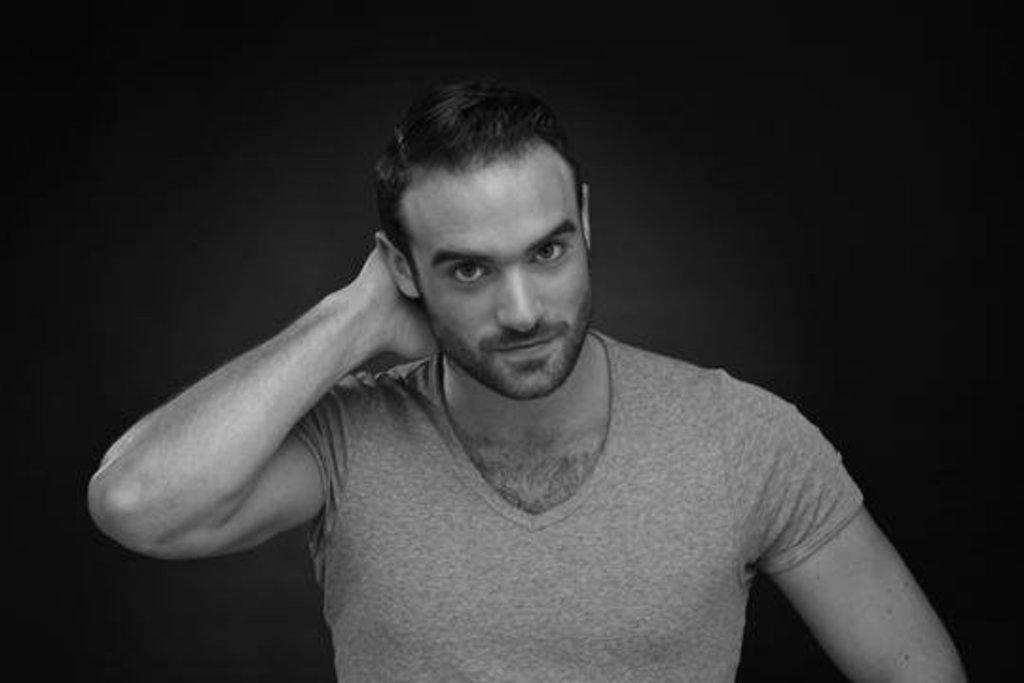 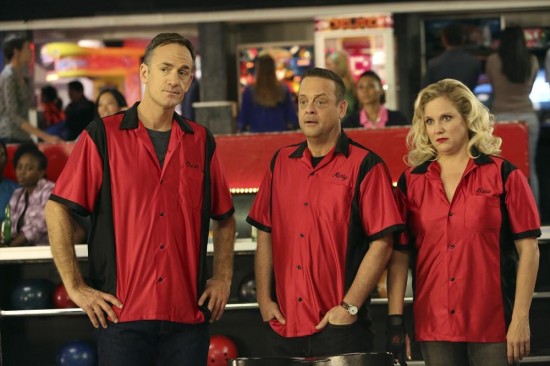 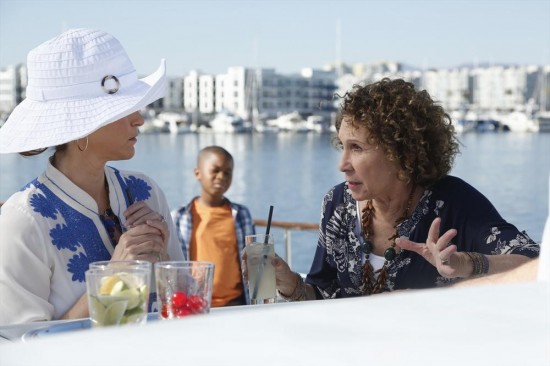