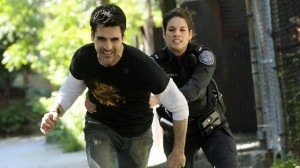 ABC has announced multiple changes to its 2014 summer schedule, starting with the premiere of Sing Your Face Off, an upcoming talent competition where five celebrities will take on the identity of an iconic musical act and perform that musician’s songs. The series, which will be hosted by John Barrowman and count Debbie Gibson and Darrell Hammond as primary judges, will premiere Saturday, May 31st at 9:00 following the season premiere of Bet on Your Baby, making Saturdays all-original.

With Astronaut Wives Club being delayed until midseason, Rookie Blue has its fifth season premiere moved forward to Thursday, June 19th at 9:00. It will bump planned reality-competition series The Quest, from the producers of Lord of the Rings, back to Thursday, July 31st at 8:00.

Below is an updated list of premiere dates for ABC’s summer 2014 programming.

Will you be watching Sing Your Face Off? Could this decision be a sign that the networks will start taking Saturdays more seriously? Are you excited about getting Rookie Blue earlier than you previously thought?