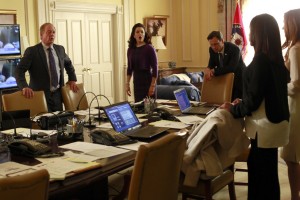 The 2014 Peabody Award recipients were announced on Wednesday and among the scripted television winners were political soap Scandal, which is the rare broadcast drama that is up in the ratings season-over-season; Netflix cornerstone House of Cards; French drama The Returned, set to air its second season on SundanceTV later this year; and Danish political drama Borgen.

“The quality of storytelling in electronic media continues to increase year-after-year, across platforms, producing organizations and nations,” said Dr. Jeffrey P. Jones, director of the Peabody Awards. “The unprecedented number of awards we gave this year reflects this fact. There simply are a larger number of stories that deserve our attention as citizens and consumers. And what a wonderfully rich and satisfying set of stories we’ve called attention to this year!”

First awarded in 1940, the Peabody Awards recognize excellent and meritorious work being done by radio and television stations, networks, webcasters, and producing organizations. The 16-person Peabody board, made up of television critics and cultural experts, sifted through over 1000 entries this year. Former honorees include Southland, Switched at Birth, Treme, Portlandia, and The Good Wife.

The other scripted Peabody winners this year were Orphan Black, Breaking Bad (a rare repeat winner), Orange is the New Black, The Bridge, and Key & Peele. You can check out a full list of winners here.

What do you think about the Peabody honorees this year? Was there a particularly egregious snub? Which series that received recognition deserved it the least?