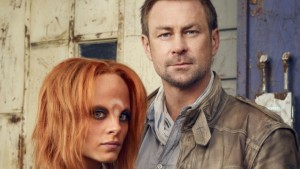 Syfy has announced that Defiance and Dominion will premiere Thursday, June 19th beginning at 8:00. It’s a night change for the former, which aired on Mondays in its first season, and a postponement for the latter, as it was originally scheduled to premiere June 12th.

The second season of Defiance finds the town being ran by Earth Republic, with Amanda being displaced as Mayor. While Nolan goes on the hunt for a missing  Irisa, the Tarr family fights to keep their criminal empire from crumbling in the wake of a new regime. Joining the cast this season are James Murray (Krod Mandoon and the Flaming Sword of Fire), Anna Hopkins (Barney’s Version), and William Atherton (Die Hard).

Based on 2010 film Legion, Dominion is set 25 years in the future and showcases a world still recovering from a war between an army of angels and mankind. The series stars Christopher Egan (Kings), Tom Wisdom (300), Roxanne McKee (Game of Thrones), Alan Dale (Lost), Anthony Stewart Head (Buffy the Vampire Slayer), and Luke Allen-Gale (The Borgias).

Additional Syfy summer premiere dates will be revealed soon. You can check out the trailer for Legion and a teaser for Dominion below.

Will you be watching Defiance and/or Dominion this summer? How do you think Defiance will do on a new night? Could this mean that Syfy is ready to transition its scripted product to Thursdays?