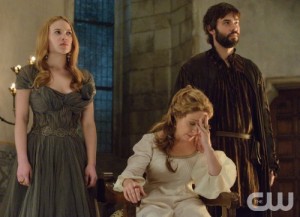 All Bash wanted was to find someone to care about outside the castle walls and the second he did, he became responsible for their downfall. Rowan’s capture at the hands of The Darkness is squarely on his shoulders and as such, Bash is going to do anything and everything he can to get her back to prove to her how devoted he is, to make up for getting her kidnapped in the first place, and to show his family that he’s more than the bastard they make him out to be. However, in order for him to have a shot at bringing down The Darkness and saving Rowan from the type of torture Olivia went through, Bash is going to have to return to the castle looking for men.

On tonight’s episode of Reign, Bash does just that and gets a reluctant Francis to agree to march toward The Darkness in hopes of saving Leith. This will give Bash the opportunity to show Francis that there’s more than bloodthirsty pagans in the woods and to see where things stand with his brother following the banishment from the castle and the attempt on his life. As distant as the two have become since Mary arrived from Scotland, Francis and Bash are still brothers and still have that strong family bond that doesn’t disappear completely; it’s decidedly frayed at the moment, both due to Bash’s actions and Francis’ paranoia/insecurity, but there’s still a chance that the two could work things out and become the key figures in each other’s lives that they’re meant to be. However, will Francis allow himself to forgive Bash for nearly changing the line of succession? Or is there nothing the royal bastard can do to make up for what’s happened between him and his brother?

Elsewhere on Reign, Henry’s madness intensifies when he becomes obsessed with a servant, while Greer gets caught kissing Leith, something that could ruin the relationship her parents helped set p.

If Bash saves Francis, will he earn his way back into French court? D0 you think the servant Henry obsesses over could be his next victim? Would Greer willingly risk her engagement and keep Leith in her life?