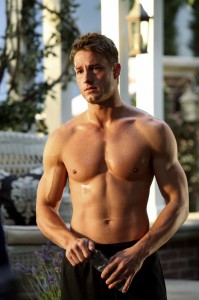 TVLine is reporting that Justin Hartley (Smallville) has signed on for a recurring role on ABC summer soap Mistresses. He’s set to play Scott, a Los Angeles plastic surgeon who becomes a love interest with Joss and causes her to question whether she’s able to fall in love.

Mistresses will pick up months after the events of the first season finale, giving Joss plenty of time to get over her breakup with Alex and her self-sabotaging actions that led to the parting. Last season, the insecurity that Joss has about the shallowness of her love life and the fact that she’s never been in a long-term relationship bubbled up to the surface due to her fling with Alex, as those in her life (correctly) assumed that things would go south and that she wasn’t completely committed to the idea of being serious, let alone serious with a woman. It might have hurt to know that how she views herself is how those she loves view her as well, but Joss being willing to confront that issue and acknowledging that she can’t find someone if she’s not willing to open herself up emotionally are major steps that can only help anything that develops with Scott. However, even with the several months cushion from the breakup and the self-awareness to know what her issues truly are, has Joss found what could be her first love?

In addition to his role as Oliver Queen on the WB/CW genre series, Hartley has appeared on the likes of Revenge, Emily Owens M.D., and Gemini Division. He’s also currently attached to Damaged Goods, an ABC comedy from Awkward creator Lauren Iungerich.

The second season of Mistresses premieres Monday, June 2nd at 10:00 on ABC. You can check out a recap of the first season finale here.

Do you think that Joss is ready, willing, and able to fall in love? How will the relationship with Scott impact Joss’ life, both negatively and positively? What do you hope to see during the second season of Mistresses?