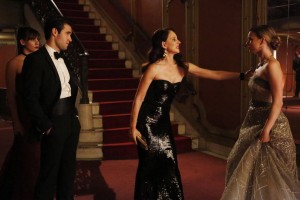 Emily Thorne may have recommitted herself to her goal of exacting vengeance upon the Graysons, but she doesn’t have as much control over the situation as she would like. Thanks in part to her series of blackouts, which she only recently learned the cause of, Emily has been falling behind on her plans for the Graysons and doesn’t have as much surety in her step as she did when she first arrived in the Hamptons. She’s going to have to make up for lost time and then some if she has any hope of finding the justice that her father was denied, especially if she continues getting into public squabbles with Victoria Grayson, making herself a tabloid queen rather than a philanthropist and pinning suspicion on herself if anything ever goes awry.

On the next episode of Revenge, Victoria and Emily have another public showdown, with Victoria decidedly having the advantage going in. She’s still angry about what the Hamptons did to Patrick and the lengths that she had to go to ensure his safety, so seeing Emily out on the town and being reminded of the pain the Grayson family went through might be too much for her to deal with, hence the confrontation. Of course, it’s a short-sighted move to get involved in something so public, seeing as how Victoria risks being painted as the aggressive, over-the-hill shrew attacking a woman still recovering from a near-fatal shooting, but Victoria only cares about sending the message that neither she nor her family are to be messed with.

Elsewhere on Revenge, Pascal LeMarchal’s arrival in the Hamptons causes major reverberations, with the epicenter being the offices of Voulez.

How do you think Emily will handle the public showdown with Victoria? Is there a chance that Emily comes out of the ordeal looking worse than the erstwhile Mrs. Grayson? Will Margaux shrink in the presence of her father or will she keep him in line while he’s in the Hamptons?