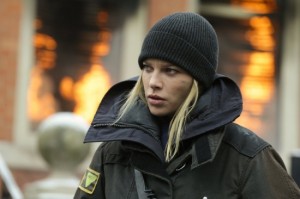 NBC has announced that Grimm, Chicago Fire, and Chicago P.D. have all been renewed for next season, joining previously announced renewals The Voice, The Biggest Loser, Celebrity Apprentice, The Blacklist, and Parks and Recreation. The network is up 20% overall from a year ago and ranked #1  for the first time in 10 years this late in the season.

Heading into its fourth season, Grimm is the #1 series on broadcast Fridays, up 4% in the 18-49 demo and 17% in total viewers. The series stars David Giuntoli as Portland Detective Nick Burkhardt, who discovers he’s descended from a long line of supernatural criminal profilers known as the Grimms. In addition to Giuntoli, Grimm features the likes of Bitsie Tulloch, Russell Hornsby, Silas Weir Mitchell, Bree Turner, Reggie Lee, Sasha Roiz, and Claire Coffee.

Second season firefighter drama Chicago Fire has been the #1 broadcast series in its time slot, up 35% in the 18-49 demo and 33% in total viewers. Additionally, the series has improved its Tuesday time slot by 24% vs. a year ago. Created by Dick Wolf, Chicago Fire stars the likes of Jesse Spencer, Taylor Kinney, Monica Raymund, Lauren German, and David Eigenberg,

Grimm airs Fridays at 9:00 on NBC, with Chicago Fire airing Tuesdays at 10:00 and Chicago P.D. Wednesdays at 10:00. You can check out NBC’s recently announced season finale dates here.

Do you think we’ll see any more early renewals from NBC before its upfront presentation? Should NBC move Chicago P.D. to another time slot next season? Where would you like to see Grimm air in syndication?