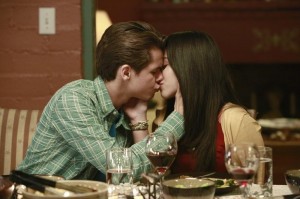 Mariana has been looking to ease her loneliness during the winter season of The Fosters, as she’s had to deal with Lexi moving to Honduras, an embarrassing incident with popular boy Chase, and Zac having a bipolar mother who made threatening phone calls to her. All she wants is for somebody to pay attention to her and to validate her existence and she might have gotten that with Zac, who she’s coaxed into forming something of a relationship with her. While the two have danced around each other, seemingly afraid to take the next big leap in their…whatever they are, Mariana finally decides to take things upon herself and go after what she wants.

On the next episode of The Fosters, Mariana strongly hints to Zac that she wants to go to the upcoming Winter Ball, only for him to get cold feet and refuse to ask her when the opportunity presented itself. It’s understandable that he’s reticent about the dance, seeing as how he and Mariana aren’t officially together yet and this would be all but force them to close the deal; Zac’s still worried about the impact his mother will have on any potential relationship with Mariana and he doesn’t want to drive her away just as he finally gets her in his life. Granted, his mother is leading the charge in getting him to ask Mariana out, but he knows how she can be and that she’s only an inch from turning into a completely different person. But could there be something else that’s keeping Zac from asking Mariana to the Winter Ball?

Elsewhere on The Fosters, Ana returns with unsettling news for Stef, while a surprise nomination for Winter Queen raises suspicions, Jesus struggles without his medication, and an old friend looking to make amends pays Callie a visit.

Will Zac eventually ask Mariana to go to the Winter Ball? Should Jesus go back on his ADHD medication? Who do you think will pay Callie an unexpected visit?