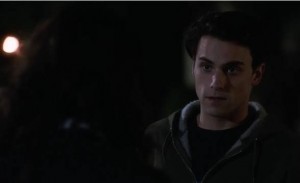 Jo has seemingly been looking for a reason to turn her back on Danny this season on Twisted. After previously sticking her neck out for him and acting as his lone source of support when he first got back from juvie, she’s spent much of her time running away from their friendship and the baggage his presence brings along. She knows what she lost when he went to juvie for Tara’s murder and how his time back in Green Grove has kept her on the outside looking in, even more than she was before he came back home; as anti-establishment as she tried to posture herself as, Jo just wants to be accepted by her peers and she knows that as long as she has Danny in her life, she’s never going to be completely normal and never going to be able to let what happened in the woods go.

On the next episode of Twisted, Danny confronts Charlie about Jo knowing of his wishes to kill his father, a story that hasn’t been completely told and likely won’t be able to be told since Jo is now refusing to associate with Danny. But while Danny is upset at Jo shutting him out, he’s more upset about Charlie being the source of the tension between the two, as he feels like his old roommate is deliberately manipulating his (former?) best friend and driving a wedge between them for his own selfish gain. Charlie knows that Jo is insecure and vulnerable, so rather than pray on Lacey like he was seemingly planning to earlier this season, he decided to go for her and try to mess up Danny’s limited social circle as best he could. Granted, Danny’s at fault for not being more honest with Jo to begin with and Jo’s at fault for not thinking critically enough about what Charlie told her (e.g. was Danny just blowing off steam or speaking figuratively?), but Charlie is the source of much of the trouble in Green Grove and with Danny and Jo on the outs, he might have already achieved his ultimate goal in coming to town.

Elsewhere on Twisted, Whitney’s wild side begins rubbing off on Lacey, while Karen gives Danny advice on moving on with his life and Kyle turns his suspicions toward Jack.

Do you think that Charlie is manipulating Jo into turning against Danny? Should Lacey embrace her wild side and let loose after all the stress from Danny? Is Jack the one who moved Vikram’s body or is Kyle going to be chasing a false lead?