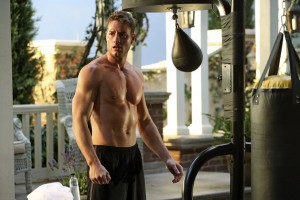 Victoria Grayson managed to bury part of her past when Patrick killed Jimmy and rid her of the man who forced himself on her. Though part of her was relieved that he would never have the chance to hurt her, or anyone else, again, she’s still a long way from recovering from the trauma he inflicted upon her, both during the encounter they had and the years she spent looking over her shoulder, terrified that he would show up again. But before Victoria has the chance to take a breath and enjoy a life without the threat of Jimmy, there’s the whole matter of her residence to take care of.

On the next episode of Revenge, Victoria makes a drastic move against Stevie with the intention of muscling her out of the mansion and returning to the home that she’s put in the time and effort to build. She’s earned every inch of the mansion with each day she dealt with Conrad’s deception and her ungrateful children, so while she could always just find a place to stay with Patrick and begin taking the steps to exorcise the last of her Vicky Harper ghosts, Victoria Grayson will be damned if she lets someone come in and take over her turf, especially someone she already came out on top of all those years ago. But she might not need to go too hard on Stevie, since the first Mrs. Grayson has been making her own moves against Conrad and could prove to be a valuable long-term ally in the bid to remove the Hamptons of Conrad Grayson once and for all.

Elsewhere on Revenge, Emily’s increasingly violent blackouts push her toward the person she’s betrayed the most.

Who do you think Emily will turn to in her time of need? Will Victoria be able to keep herself at the mansion? How will Jimmy’s death weigh on her mental state in the near future?