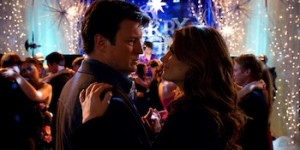 I’m dead. A song, a dance, and a kiss killed me and I wouldn’t have it any other way. “Smells Like Teen Spirit” is hands down my favourite episode of the season. I’m gonna go a step further and say it’s one of the best episodes of the entire series. You can’t see me right now but I am bowing down to Chad & Dara Creasey. It was such a beautifully written episode that had some of the best moments in the entire series and Stana and Nathan were incredible like they always are. I am continuously amazed by this show and even in its 6th season, it’s showing no sign of slowing down. The writers on this show get it and they really love their fans and it shows. The love definitely goes both ways.

The fact that it’s the next day and I’m still smiling just thinking about this episode says something. The second I heard “In My Veins” by Andrew Belle, I started to freak out and I’m pretty sure I wasn’t the only one. I’m going to sound so dramatic right now, but I was crying so much I couldn’t breathe. That song makes me so emotional, and when it played in the scene it was just too much. Castle and Kate dancing to “In My Veins” was amazing. Never in a million years could I have imagined a moment like that. I got even more emotional (as if that was even possible) when Castle and Kate said at the exact same time, “I’ve always loved this song.” I just can’t believe the perfection of that scene. “In My Veins” is going to be their wedding song. Let’s all just digest that for a moment.

Kate: “Do you regret it? That prank? Missing your prom? Not being here with Audra Dobson?

Castle: “Not even a little bit. Everything I’ve ever done, every choice I’ve ever made, every terrible, wonderful thing that’s ever happen to me, it’s all led me to right here, this moment with you.”

How perfect were those lines? Just when you thought they couldn’t be any cuter, Kate said to Castle, “Now shut up and kiss me.” A perfect way to end such a beautiful episode and that kiss! WOW. I would say it’s one of the best Caskett kisses. I will never get over this scene, and I don’t want to.

Not to take anything away from Caskett, but how cute were Jordan and Lucas? Jordan came to the dance, and while all eyes were on her, she found Lucas. She hugged him and they started to dance and they kissed. They were adorable, and let’s not forget that Lucas protected Jordan. Beckett told Castle that they found no wires, magnets, or anything that would have explained the things flying around in Lucas’ house. Love was definitely in the air at that dance.

I definitely need to talk about that scene with Castle and Kate trying to pick out their wedding music. Easy enough right? Well, Kate wanted a DJ and Castle wanted a band. I never would have pictured Kate as a DJ kinda woman. I had to laugh at the fact that they both thought their song was something different. Did they not have a song? Well, later on in the episode in the loft , while Beckett was drinking red wine (wink wink) and Castle was making dinner, Castle handed Kate a Billboard list of Top 100 romantic songs of all time.

Kate: “I’m not choosing our song off a list that includes Def Leppard’s “Pour Some Sugar on Me.”

I could not stop laughing. Witchcraft? Dancing In The Dark? Too funny!

We also learned that both Castle and Kate never went to their proms. Castle got kicked out and rebel Becks was a little too cool to go to a silly dance. She kinda wished she didn’t miss out on it. That’s what made the ending with them dancing extra special. They never got to experience it and here they were getting to experience it together.

Kate: “It’s one of those seminal moments that I kinda wish I didn’t skip out on”

The case this week was pretty awesome. Could you imagine FaceTiming your friend and seeing her murder? Yikes. It looked like Madison, our victim was murdered by ways of telekinesis, but as you know there’s always a logical explanation for things.  The case brought the team to Faircroft Prep, one of Castle’s many schools. It turned out, Castle’s Principal was still there!

According to Madison’s friends, there was an incident in the cafeteria two weeks prior and everything was caught on camera. Some guys were playing hot or not and Jordan the black sheep student was being bullied and then stuff literally hit the fan.

It made me quite angry when Madison’s friends were talking about Jordan saying  she was odd and she was into weird stuff. I mean, just because someone is into different stuff than you, doesn’t mean their odd. That’s what the bullies always say. I was thankful Jordan had Lucas on her side trying to protect her.

Castle and Beckett then went to see the doctor that taught people how to unlock their potential. According to the doctor Jordan didn’t know how to control her powers. When they first walked in, Kate’s face was priceless when they saw the doctor levitating. Stana’s facial expressions are top notch. Jordan revealed herself and was brought down to the precinct.

I really felt bad for Jordan while she was in the interrogation room with Castle and Beckett. Usually Jordan was invisible to people but then she saw Madison in the library after winter break and Madison threatened her. That’s when all the trouble started. I won’t lie, I did freak out a bit when the table started shaking but it turned out Jordan was just banging her knee on the table. Castle totally thought it was her telekinetic powers. Too funny!

Turns out, Madison was a little crook. Castle and Beckett went to the Russian Lit section of the library and found a hollowed out version of War and Peace. They found German bearer bonds in the book! Over a million dollars worth.

The bearer bonds were stolen from a bank. A man named Xiangzu Chen stole them. Turns out Madison’s father was Chen’s lawyer. At first I thought Chen found out his lawyer’s daughter stole 2.3 million from him and had her killed but that wasn’t the case.

Madison knew that Chen was superstitious and faked the whole supernatural patio furniture flying in the yard thing. Chen was so freaked out, he left the country and was even willing to take a loss on his house.

Of course, Beckett being Beckett had a logical explanation for everything. I really liked her theory. Of course, Castle had to chime in with, “did she stage her own death too?”  Then we were treated to Kate’s damn you got me face, which I always love.

We learned from Lucas that the whole FaceTime video at the beginning of the episode was a fake. It was pre-recorded and that Madison faked the whole thing with Lucas’ help. Madison’s friends were her partners in all of the burglaries. Kris wanted out and Madison told her she was going to destroy her. Kris couldn’t let that happen and killed Madison.

So, what did you guys think of the episode? Was Jordan really telekinetic? Anything is possible. What do you think of “In My Veins” being Caskett’s song? Perfect choice? I think so! I cannot wait for that first dance. Little tidbit I didn’t get to mention. Did you guys like that funky jacket Espo was wearing? I kind of liked it. It was really different for Javier.

I can’t wait to hear your feedback from this episode. Sound off below!

Castle: “I can’t wait to tell Stephen about this case.”

Castle: “The outcast, the mean girls, the rage that erupts in a telekinetic attack. This is a real life Carrie.”

Castle: “Be careful in there. Don’t anger her. We don’t know what she’s capable of.”

Kate: “You’re right. You should probably go in there with me. For protection.”

Principal Dunnan: “It’s haunted me for years. Where did you get the cow?

Principal Dunnan: “You’ll always be Rodgers to me.”