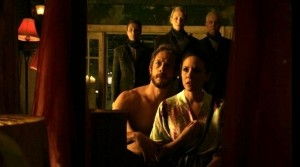 Bo is used to being in control of her life. After years of confusion about her true identity and trying to conform to the way society wanted her to be, she decided to throw away convention and live the way she wanted, which served her well through her abduction by the Wanderer. However, once she returned back from the alternate plane of existence and learned of her newfound loyalty to the Dark, she was no longer Bo, the unaligned succubus who doesn’t adhere to the structure of Fae society; she’s now selectively amnesia sufferer Bo, who must figure out the identity of who got her to sign her allegiance to Evony while rebuilding the part of her memory that was destroyed when she leapt off the train.

On the next episode of Lost Girl, Bo rescues an opera singer whose voice may be the key to restoring her memory and renouncing her allegiance to the Dark in favor of her previously unaligned state. While part of her annoyance at being aligned is in being told what to do and having someone to answer to, where it could really hurt her is in situations like this, where her status of a Dark Fae might not allow her the same ins and social movement that she would have in her previous incarnation. The reason Bo was such a successful private investigator early in the run of Lost Girl was her ability to blow through the Fae bureaucracy that those who were aligned had to adhere to; now, though, she’s one of the masses, wrapped up in red tape and personal biases based on who she’s pledged her allegiance to. Once Bo brings the singer to safety, will she be able to unalign herself once more? Or are more obstacles to loosening Evony’s grip on her going to pop up instead?

Elsewhere on Lost Girl, someone from Hale’s past seeks to harm Kenzi.

Who do you think got Bo to sign her allegiance over to the dark? Why would somebody be looking to harm Kenzi? Is there a chance that Lauren renounces her loyalty to Evony and comes back to the Light?