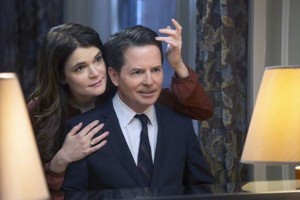 All three of NBC’s new comedies have now come to an end.  The peacock net has cancelled The Michael J. Fox Show – a decision that comes one week after production halted on Sean Saves the World.

NBC has pulled the remaining episodes of the comeydy from the schedule.  In its place, new episodes of Hollywood Game Night will air after the Winter Olympics wrap up.

Unlike Sean Saves the World, The Michael J. Fox Show has completed production on its complete 22-episode season.  Therefore, the show is still hanging somewhat in purgatory, as it is uncertain if and when the remaining seven episodes will air.

Despite the show’s monster premiere to 7.5 million viewers (2.2 in the 18-49 demo), The Michael J. Fox Show has been steadily slipping in the ratings throughout its run.  We’ve all seen where this was headed, though the show still maintains a small, yet loyal audience.

While NBC has had some success for the past couple of seasons in dramas (Revolution, The Blacklist) the repeated cuts to new comedies that yes, do have audiences, suggest that perhaps the net should try a different tactic.  Perhaps we should be giving comedies a chance to grow before pulling the plug.