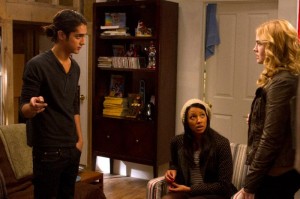 When Danny came home after spending five years in juvenile hall, the one person he needed in his life was his father, as the two were incredibly close before Tara’s murder. If there was anyone who would be able to comfort Danny and help him readjust to life on the outside, it would be Vik, but unfortunately for Danny, his father was taken away from him when he seemingly died out on the sea. Thus, Danny at least subconsciously resented his mother, making their relationship all the more tense, and found himself running from the cops at the end of Twisted‘s summer season. But little does he know that Vik is still alive and that if his mother can use her connections well, he might be coming back to Green Grove sooner rather than later. Will the return of Vik help Danny find the answers he’s so desperately looking for?

Tuesday, February 11th – “Dead Men Tell Tall Tales”
Jo is still struggling with her conflicted feelings about Danny when he turns to her for help while hiding out from the police. Danny overhears some surprising information about his father, which leads him on a quest to find out if his father is indeed alive. Lacey brings some information to Kyle regarding Regina, which she doesn’t realize points to a surprising new suspect in Regina’s murder. And Danny shocks Jo and Lacey when he finally reveals the details of what happened with his Aunt Tara all those years ago. Meanwhile, Karen turns to an old friend (recurring guest star Ivan Sergei) for help in locating her presumed dead husband, not realizing Tess may hold the key to his whereabouts. And while searching for Danny, Lacey encounters new Green Grove resident Charlie (recurring guest star Jack Falahee), who quickly ingratiates himself into her life.

Tuesday, February 18th – “Sins of the Father”
Danny struggles to come to terms with the latest development in the search for his father. While he is determined to come clean, he wonders if he truly deserves the chance to start his life over. Lacey becomes convinced of a connection between Gloria Crane (guest star Jessica Tuck) and Vikram, while Charlie becomes increasingly interested in Lacey’s actions. Meanwhile, tension builds between Karen and her old friend Jack, and Karen questions the wisdom of letting the past back into her life. The hunt for Regina’s murderer uncovers an unsettling connection to Mayor Rollins (guest star Christopher Cousins).

Why do you think Vik faked his death in the first place? Is there a reason that Danny is choosing now as the time to reveal what happened with Tara? How long will Jo try to isolate herself from Danny and avoid getting herself involved in the case?