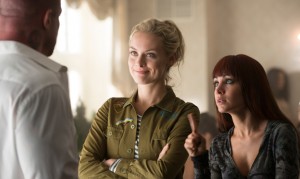 Bo’s blood was able to make the decision that Bo herself wouldn’t when it revealed that her allegiance was with the Dark, throwing a wrench into a world where she leaned more Light. Still making sense of things since returning from her time on the death train, the last thing Bo needed was something like this, a break in the normalcy that she looked forward to basking in following a decidedly abnormal trek across the various planes of existence. Now, instead of reconnecting with Kenzi and spending quality time with Dyson, she has to figure out what she wants to do about her new allegiance and whether she would even want to join the Dark as another one of Evony’s many minions.

On the next episode of Lost Girl, Bo and her friends end up at a gathering of the Dark when she’s ordered to pay fealty to the Morrigan. While those attending aren’t exactly her crowd, Kenzi and Tamsin find Bruce, the Dark enforcer who was sent to torture her and wound up helping her search for Massimo, and learn that he’s been sired to another Fae, with the accounts of his tropical vacation that he’s been sending Kenzi lies to keep her from worrying. However, Kenzi is as loyal to her friends as one can get and when she hears what Bruce has been dealing with for the past several months, she gets Tamsin to stake a claim on being his sire, drawing out the Fae who he belongs to for something of a duel. Though Tamsin has grown even more powerful in this new life, supposedly her last, she doesn’t have enough control over said power in order to go against a member of the Dark, meaning that she’s going to have to simply overpower Bruce’s current sire rather than entertain the idea of a longer battle for his rights.

Elsewhere on Lost Girl, Trick receives a summons to appear before the Una Mens.

Will Tamsin win the right to sire Bruce? What will Bo find out while at the gathering of the Dark? How do you think Trick’s meeting with the Una Mens will go?